When it comes to a bucket list, most people share the same common goals. Trips to Italy, Greece or Switzerland always seem to be at the top of the lists. But for me, I look for some of the most uncommon goals. The one I was able to complete Friday night, was doing Play by Play for Your Montrose Red Hawks. Our Main guy was out due to family reasons, so we were thrust into the spotlight with little time to prepare.

I was nervous, since I hadn’t really followed the new batch of youngers coming up thru the ranks. But quickly we learned the names, mostly chasing down jersey numbers thru binoculars. By the second quarter we were feeling more comfortable. But as the game played on, we were quick to notice that our play by play was just a small part of what was taking place on the field.

It was a new era for the school, formerly known as the Indians, the name was changed due to political correctness. The community still wasn’t a big fan of the new name. But I found out that night that the Students of Montrose High School have embraced the new Era with passion and Gusto. I spoke with Coach Clay Stidham Jr, and he was telling us the team has “great honor for the traditions of the past but have fully embraced being the foundation of a new era. They frequently talk about how they play for the community and their Montrose Family!”

Even though the RedHawks came out on the losing end losing to Plamer Ridge 35-28. They Grew a lot that night. 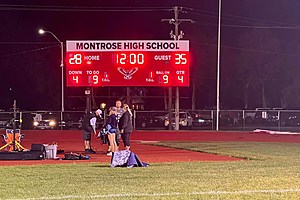 according to Coach Clay. “This is the best team I have ever coached in 25 years! We grew tonight as a team. In regard to football, we don’t play the game to solely win. We Play the game to be worthy of the game! Chase perfection, Achieve Excellence!”

Welcome back to KUBC Gold

It appears that you already have an account created within our VIP network of sites on . To keep your personal information safe, we need to verify that it's really you. To activate your account, please confirm your password. When you have confirmed your password, you will be able to log in through Facebook on both sites.

Welcome back to KUBC Gold

It appears that you already have an account on this site associated with . To connect your existing account just click on the account activation button below. You will maintain your existing VIP profile. After you do this, you will be able to always log in to http://kubcgold.com using your original account information.

Please fill out the information below to help us provide you a better experience.

KUBC Gold brought to you by:

KUBC Gold brought to you by: